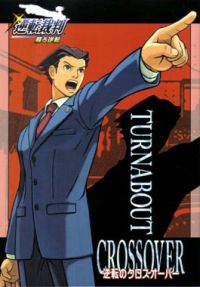 Summary: An interview with Suekane Kumiko, character designer for the first Gyakuten Saiban (Ace Attorney) on the Game Boy Advance. The interview was included in the booklet Turnabout Crossover (2005), which was included with the Limited Editon of the Nintendo DS release of Gyakuten Saiban Yomigaeru Gyakuten (Ace Attorney DS). Suekane, now a freelance artist, talks about how she designed some of the characters, but also how she had a lot of influence on the role of the characters within the story. She also comments on the special comic she drew for Turnabout Crossover as well as simply how she does her work.

Suekane Kumiko
For GBA Gyakuten Saiban 1, Suekane worked on the character designs and other art-related work, and was responsible for commenting on the story. She has left Capcom now and is now ‘drawing comics and illustrations and stuff’ as a freelancer.


I Made The Logo of Gyakuten Saiban

Interviewer: Could you introduce yourself first?

Suekane: I designed all of the characters of GBA Gyakuten Saiban 1 (= Episode 1~4 on Nintendo DS). It first started with design, then the characters and backgrounds, and in the end I even had to make the logo. The very last cleaning-up of the logo was done by somebody else, but I was the one who laid the foundation. I did everything that had to do with graphics. The “Objection!” bubble in the game, that is my super hand drawn work (laugh). I can still draw it just like that when asked (laugh).

Inteviewer: How were the alluring characters of Gyakuten Saiban created?

Suekane: I was given no specific orders about the characters by director Takumi, so I really just drew whatever I wanted. At first, there was not even an idea of how the protagonist should look, and it was just a “as long as he fits the story” stance. I think that nowadays, director Takumi will have all kinds of different images of characters in his mind, but back then he really had nothing, and I was free to draw the way I wanted. And because I had that freedom, I poured my own ideas in the designs, ‘so women can accept the male characters, and men the female characters’. I started on the work hoping that the people who would play the game would get hooked, even if just a little, by the characters.

Interviewer: Were there any characters who were especially easy to design, or very hard?

Suekane: This holds for all games, but the protagonist is the hardest to decide on because they’re “the most neutral”. So at the time, Naruhodo was my biggest problem. And the easiest to design was his rival, Mitsurugi. There was a period early in the development cycle,  when I still hadn’t decided on the art style, but when that was solved and I had decided on the art style, the first character I decided on was Mitsurugi. He was the first character in Gyakuten Saiban who was created.


It Was Me Who Saved Mitsurugi From Being Old!

Interviewer: Was there something you were fussy about when designing the characters?

Suekane: I was not fussy about the art. But early in the development cycle, Mitsurugi was in danger of being an old man and I remember simply refusing. “Who is going to want this character!” . If you’re going to have a character who is to stand opposite Naruhodo, you need a character who stands equal to him in a certain way, or else there won’t be a conflict, and characters close in age are much better recognizable as rivals and that makes it easier for people to get in the story of the game. Also, relations like siblings or rivals, or friends or lovers, those kinds of “unchangeable relations between two people” are easy to understand for anyone and makes it easier to empathize with them and are crucial as a plot point in creating a game. If an old man appears who is described as “your eternal rival”, you’d just think: “But he’s going to die soon anyway!” (laugh). And that’s why I stopped Mitsurugi’s transformation into an old man. In fact, early in the development cycle, Chihiro (Mia Fey) was planned to only appear as Mayoi (Maya)’s sister and then die. If the sister appears, dies, and the little sister comes to you saying “I’m innocent, help me”, then you’ll think: “Eh, well, but…”. So I fought for a personal relation with the protagonist, and suggested that they could make her into the protagonist’s mentor or something. And luckily, that idea was accepted (laugh).

Interviewer: And that is how Mitsurugi, a character who has gathered a lot of popularity, was created.
Suekane: Yes. But do you know, I don’t even know why he’s so popular. The reason he looks the way he looks now, is simply because he’s the rival. But I hope the characters won’t change in the DS version. The final appearance of the characters are all so different now from  since I worked on the first game. I guess that all characters grow. Something like that (laugh).


I went to Aichi!

Interviewer: How was it making the comic that is included in this limited booklet?

Suekane: It was chaos! (laugh) I am the one who created Naruhodo, so I shouldn’t be the one talking, but Naruhodo’s hair is really a bother!  “I can’t do this!” It was pretty touch-and-go (laugh). Near the deadline, I was asking everybody for help (laugh). Well, I did go to the World's Fair in between (laugh). I went to Aichi! (laugh) But I really did do my best!

Interviewer: Tell us about creating the comic. What do you usually use? Lately there have been many people who work digitally.

Suekane: I work analog. I don’t have the time to learn digital, so I’m still analog. I have an enormous prejudice that all comics should be drawn with a G-Pen, so I just draw with a G-Pen. Lately, there are  lot of people who don’t use them, and in my mind, I’m all like “Eh? But you’re not a manga artist!” (laugh).

Interviewer: When did you start drawing illustrations and comics?

Suekane: From kindergarten. I started drawing comics after I turned twenty. I really learned myself to draw, with the idea that “comics should be drawn with a G-Pen”. In those books for elementary school children, there’s often a section with “How To Draw Manga”, you know? I still have that image from when I read them as a child, and that’s probably when I got the idea imprinted in me that comics should be drawn with a G-Pen! (laugh). I haven’t changed a bit since then (laugh).

Interviewer: When did you start thinking about making drawing your profession?

Suekane: In high school. There was a reason…I had the lowest grade in a math test (laugh). That was when I thought: “Aaa! I can’t study!” (laugh). The reason I got into Capcom was also unbelievable. When I was working on looking for a job as a fourth year student, the girl next to me said “I’m getting into Capcom,” and I said: “I’ll try there too” (laugh).  I was just going with the flow and it got me in Capcom.

Interviewer: Do you have a last thing to say to fans of Gyakuten Saiban?