Summary: In the marketing campagin leading up to the release of Dai Gyakuten Saiban (The Great Ace Attorney: Adventures), director and scenario writer Takumi Shū had a discussion interview with mystery writer Ōkura Takahiro, well-known for his Fukuie Keibuho ('Lt. Fukuie') series (see this link). While the main theme was of course Dai Gyakuten Saiban, the topic of the discussion eventually changed to the famous TV mystery drama Columbo. Both men are big fans of the series, and they started to talk that much about it, it had to be cut out of the original interview text. Kono Manga ga Sugoi eventually did publish this part of their interview, exclusively about Columbo, on their site. This translation is of the extra part specifically about Columbo.

Images taken from the source article. Copyrights belong to their respective owners.


A Never-ending Love for Columbo

Takumi: I too love Columbo. Lots of people urged me to read your Fukuie Keibuho ('Lt. Fukuie') series, because they said was written by someone who loved Columbo. And that was indeed the case, I found out once I started reading the books. 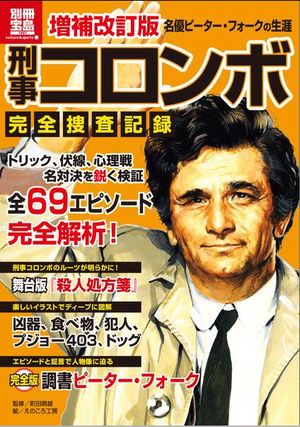 Ōkura: Actually, I only started writing the Fukuie Keibuho series, because I wanted to write something like Columbo. But doing an inverted mystery like Columbo is difficult: because the culprit is known from the start, there's little left to hide. On the screen, they can also show Peter Falk's acting, but in novels, the complete truth is written there right from the start, and there's nothing interesting left. I thought about that problem for two, three years. Then I remembered what my editor said when I was given the job of writing a novelization of Columbo. "You can do anything you want, just don't let us know what's going in Columbo's head. Nobody knows what Columbo's thinking, and that's the point." And that's exactly it when you watch him. Columbo might be saying something about his wife, but we don't even know if he really has a wife. Having remembered that, I came up with the style of always describing Fukuie (the protagonist of the series) in the third person and have the crime solved without ever knowing what Fukuie was thinking.

Interview: Mr. Takumi, how do you write your characters?

Takumi: Games are meant to be played by the users, so I am of the opinion that the protagonist should not have a strong, clear-cut personality. As a result, I think I'm doing something similar to what Mr. Ōkura here just said about Columbo. For example, I don't touch upon Naruhodo (Phoenix Wright)'s past in the games, and the players don't even know what happened to his parents. Fans often ask me about the birthdates of characters, or their bloodtype or favorite food, but I don't talk about them on purpose.On the other hand, my own personality might be shining through my characters... In the game, Naruhodo's thoughts are shown as monologue, but those inner monologues are just my own, personal thoughts. So when people say "Naruhodo is actually quite sarcastic", they're actually talking about me (laugh).

Ōkura: Detective Conan's Conan's inner thoughts are sarcastic too. Thoughts like "Didn't you know about that!?". I think it's something like that. I actually like that though. It might be a bit sharp-tongued, but there's a refined sharpness. You can't have a mystery story with a bit of spite. I think Columbo too can be a bit mean too. He is not as nice as he seems and can be a bit meanspirited. 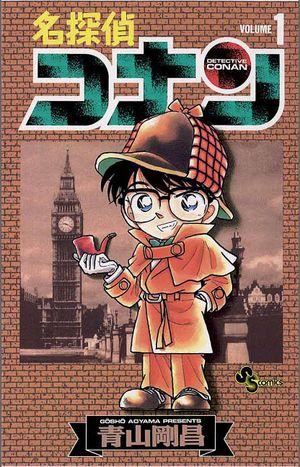 Takumi: Mr. Ōkura, what are your three favorite episodes of Columbo?

Ōkura: It always comes to this when I get to talk about Columbo. I am a fan of Identity Crisis.

Ōkura: My no. 1 is Identity Crisis, no. 2 is The Bye-Bye Sky High IQ Murder Case and no. 3 is Columbo Cries Wolf, of the ABC series.

Takumi: No! Oh, sorry. I'm just surprised at how different our picks are. I haven't seen much of the ABC series actually.

Ōkura: Well, of the original run, my no. 3 could be Now You See Him, Candidate for Crime or The Conspirators. But none of the fan-favorites like Any Old Port In A Storm or Forgotten Lady. What are your favorites, Mr. Takumi?

Takumi: When I was a kid, I used to record the audio of Columbo episodes on a cassette tape and listen to them in my room, but the one I listened most to was Negative Reaction. Looking back, I think it has all the essentials of Columbo. The surprise ending, but there's also the part where Columbo is mistaken for a homeless guy, it has everything Columbo. If I needed to recommend one episode, it would be Negative Reaction.

Ōkura: True, Negative Reaction is a very balanced story. There's the nun, and the drunk who starts talking and there were also great guest stars.

Takumi: The Japanese dubbing was great too! (laugh). I originnaly wanted someone like talking like that too in Gyakuten Saiban, but it was too difficult and I gave up. Oh, and these might be predictable, but I also love Suitable for Framing and Short Fuse.

Takumi: And I also like An Excercise in Fatility.

Ōkura: That's a good one too. But fans probably like all episodes (laugh)

Takumi: To be honest, of the titles you just mentioned, I don't remember much of Identity Crisis. It didn't leave much of an impression.

Ōkura: Patrick McGoohan directed and starred as the murderer in "Identity Crisis" but it's not really a mystery story... He's just going with it. The trick is really rather forgettable. But for me, Columbo is not about the script or mystery plot, but about the directing and the performances that touches the heart.

Takumi: I see. So you look at it as a visual product.

Ōkura: Yes, how good it is on the screen. So my list of three favorite episodes is probably quite different from people who focus on the mystery plot. 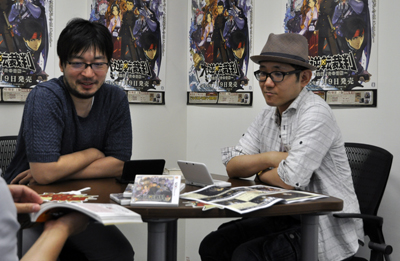 Mr. Ōkura and Mr. Takumi all caught up in their talk on Columbo. They are looking intently at the contents of Bessatsu Takarajima's Columbo - Kanzen Sōsa Kiroku ('Columbo - Perfect Investigation Files')

Interviewer: It's been an interesting discussion, but it's about time... Do you have something to say to the fans?

Ōkura: I can feel the influence of Columbo in Gyakuten Saiban. For example, there's the thing with the IV drops in Turnabout Succession, episode 4 of Gyakuten Saiban 4 (Ace Attorney 4 -Apollo Justice). I won't go into details, but the part where it goes "the only way you can know about this if you were there at that time", that's a type of logic often used in Columbo. It definitely got me. Mr. Takumi, I hope you'll make more stories with these kind of reasonings. In my opinion, the heart of Gyakuten Saiban lies not in proving your client's innocent, but the process towards that.

Ōkura: True. Inverted mysteries might be easy to understand for the modern reader, but I'd be a bit disappointed if all the titles mentioned in a list of "Recommended Mystery Stories" would be inverted mystery stories.

Takumi: The real fun behind mystery stories lies in the logic when you connect all the hints and solve the mystery. Inverted mysteries on their turn have their chance to shine because they're the outliers. But if people would first start with inverted mysteries and then work their way through the classics, I'd be happy with that too as a mystery fan. The world of mystery stories is wide and deep. I'd also love it if people would watch the TV drama Columbo once again.

Interviewer: Mr. Takumi, Mr. Ōkura, thanks for your time. 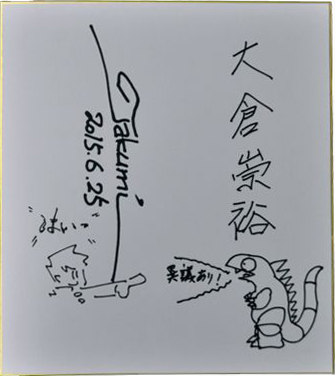 A super-rare card signed by the two. There's a presents campaign at the official Gyakuten series fanclub Gyakuten Tsūshin (registration free of charge, for all ages), so sign up!