Summary: In the second blog entry for Gyakuten Saiban 6  (Ace Attorney 6 – Spirit of Justice) which was first posted  on May 26, 2016, director Yamazaki Takeshi talks about the underlying theme of his team's latest game. His (probably slightly dramatized) account of how he came up with the idea is full of despair, betrayal, suspence and other thrills. He also shows off an amazing piece of concept art for the game, back when they basically had no idea yet what they were going to make.

Images are taken from the source article. Copyright belongs to the respective owners


The Theme of Gyakuten Saiban 6

I was thinking about talking about the theme of Gyakuten Saiban 6 today. The first thing we did when the 6 project started, was decided on the theme of the game. Everything started from there.

The theme of Gyakuten Saiban 5 (Ace Attorney 5 - Dual Destinies) was “the destruction of the court.” Following this theme, we portrayed the Dark Age of Law, blew the courtroom up with a bomb and let an unbelievable character like a prisoner act as the prosecutor. By having a theme with impact, we managed to catch a lot of attention with at the time the newest game in the series, and the first one in seven years.

And now we had the sequel to that: Gyakuten Saiban 6. It’s the fate of this series to always have the hurdle: “to go beyond the previous games.” That also holds for the theme. So the theme of 6 had to go beyond the impact of “the destruction of the court.”

I cried out as loud as Odoroki (Apollo Justice) during vocal training.
Yamazaki: “What should we dooooooooooooooo!”
Having hit a gigantic wall right from the start, I desperately tried to come up with new ideas.

No! No, no, no! I needed a key phrase that was catchier, that had an impact we had never seen before.
As I cried holding my head in my hands, producer Eshiro came grinning to me.

Eshiro: What, still stuck on ta theme? Lemme see what ya have. Ha, what kind of crap is this?!
Yamazaki: I'm terribly sorry. I'm doing my best.
Eshiro: Tssk, tsssk. I guess this is as far as ya can get with yer 'talents', Yama-chan. Of course, I never expected much outta ya. Gonna quit? I’ve got more than enough replacements for ya (grin
Yamazaki: Nonoooooooooooooooooooooooo!

The producer who held absolute power and tormented the team. What oppression! A true despot! We can’t forgive someone who doesn’t consider his own team members human!

That is how I came up with the theme of Gyakuten Saiban 6: “The revolution of the court.”
… of course, that was all just a lie. But the relation between director and producer is really like that.

In reality, I finally arrived at this theme after desperately thinking of all kinds of boring ideas, and many of them were rejected.

It is important to do your best slowly, but steadily.

Anyway. So I had arrived at the keyword “The revolution of the court,” so I presented it to the producer. Eshiro  immediately gave me the OK, saying: “That’s it!”. I was all happy about that, so I went to the team members to explain this theme.

I called for all the team members in a meeting room in Capcom. And I solemly declared.

Yamazaki: The theme this time is: “The revolution of the court.”
Members: …………What?

The members had their mouths hanging wide open. I could see a big question mark float above their heads. For a whole, a painful silence ruled the meeting room. And like they couldn’t bear the silence anymore, many questions flew out of the mouths of the members.

“I don’t think a court has anything to do with a revolution…”
“A revolution in Japan doesn’t seem realistic…”
“What’s going to be revolutionized?”

I had only one answer to all of those questions.
Yamazaki: Don’t know yet. Will think about it now.

“You worthless hack! We’ll revolutionize your face!” With that, everyone started hitting me. They sat down on top of me, and punched my face until it was all swollen and I looked like another person…. Of course that’s a lie, but . But the relation between director and the team members is really like that

In reality, I hadn’t just chosen “the revolution of the court” because it had impact. I had a plan. And when I explained it, they all nodded in agreement.

It linked up with the basic theme of the Gyakuten series. I was sure the game experience of Gyakuten Saiban and the story would fit together. Ah, that was indeed a good idea.

But it was true that even though I had decided on the theme, we had not decided on anything else yet.
So from here it was a battle to make the theme concrete. What does it actually mean to revolutionize the court? To be honest, I had no idea either!

Let me show you an illustration we used in the proposal for Gyakuten Saiban 6 to show you how it was back then. I asked a designer to visualize the yet obscure theme of “the revolution of the court.” 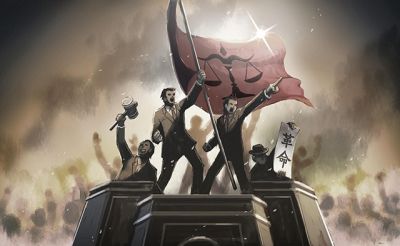 What about it? It’s like “the last chapter of a comic that has been canceled.” You can see we had nothing concrete in mind yet. It really conveys the strong sense of doubt in the designer’s mind.

But after trial and error by the team, we managed to link up the theme of “The revolution of the court” to the setting of the Kingdom of Kurain, and it evolved into a grand story with Naruhodō and Odoroki as dual protagonists. It’s all thanks to the help of the team members.

And in the end, Gyakuten Saiban 6 became a game that has far exceeded the first inspiration I had. I have been exaggerating, joking and lying until now, but this is really the truth.

How the theme of “The revolution of the court” came to fruition? I hope you will all see for yourselves with the game.

And that’s it for this time. Next time, the largest man of the 6 team will appear: planner Daigo. What kind of secret story about the development will he unveil? Look forward to it! And so, until we meet again!