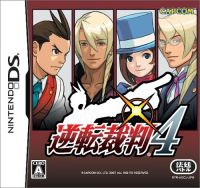 Summary: In this blog post originally posed on March 30, 2007, Takumi talks about arguably the biggest change they made for Gyakuten Saiban 4 (Ace Attorney 4 - Apollo Justice): replacing the protagonist of the first three games, Naruhodō Ryūichi (Phoenix Wright) with Odoroki Hōsuke (Apollo Justice). He explains how it was decided to replace Naruhodō, but also why he's still around in the game. Also, it is also made clear where one of the bigger surprises late in the game comes from.

Do you know, I like being tied down.
Whenever I feel I’m missing something, I like putting tying myself down.

...There might be people surprised at me coming out like this. If you stop reading now, I’m afraid this will lead to a very big misunderstanding, so please stay with me until the end. To those who don’t have that time: just forget those two sentences. Promise me!

Anyway, this time I’ll talk about substituting the protagonist. People who have played until 3 are probably most curious about this aspect of 4.

If you allow me to explain to those who don’t know the series: Naruhodō Ryūichi is a young defense attorney who was the protagonist of Gyakuten Saiban 1 ~ 3. While the episodes were all separate stories, the three games formed one big story together.

…That story ended with 3.
I don’t want to  add an episode to that story…

This is how I really felt when I got the confirmation that 4 was going to be made. On the other hand, nothing makes a creator as happy as the cry for sequels, and that too is how I really felt.
So after a lot of thinking, I arrived at this conclusion…

“If we’re going to make a true sequel to the games, it should be a completely new story.”

That way, people who don’t know the series yet would be able to get into it easily and we can offer them new surprises.…That was my (fairly reasonable) view on it.

But that was in a way, “selfishness” and I had not really expected that they would allow that to pass, but the company said: “You can change the characters.” What a generous company, Capcom. However. They gave me two conditions.


To be honest, both conditions were quite hard to accept for me. I didn’t want to have Naruhodō simply appear in a brand new story. But I also couldn’t have him interfere with the role of the new protagonist. So how should I use him? And I also had to add in ●●●●●!  … This was a tough one. By the way, what ●●●●● means? I can’t tell you before the release. I might talk about on the blog in due time, but I think you’ll know what it is if you complete the game.

… Anyway. Now I can finally get back at my confession in the introduction.

Do you know, I like being tied down.
Whenever I feel I’m missing something, I like putting tying myself down.

People who write mystery fiction (or at least me), always have rules in their mind whenever they create a story, and they have a custom of “putting ties” on themselves.

For example (and this are just examples):
Etcetera.

Mystery fiction is always about looking for some new surprise. I think that in order to find new surprises, you need to have ties holding you down. You might think that it should be other way around, but if I look back, I think it happened often that I had to struggle with my own rules like: “In order to make this story work in the best possible way, I can’t do ○○.” Or perhaps I just like being tied up.

… A new story that was born like this. I hope that you will all enjoy it. And that is it for today.

The story of Gyakuten Saiban actually has all kinds of invisible rules. …People who have played the games and read this, might be however thinking:

Yes, I'm okay with that.

…This was my tale of those mysterious restraints.

Next time, a new comrade will appear. A Large Size (← his body size) newcomer who just joined the company last year: Yamakawa. He’s doing all kinds of work in his oqn unique way that have to do with the development . I’ll have him write something with the fresh look on things we older ones have lost already.