Summary: On June 13, 2016, the seventh blog post for Gyakuten Saiban 6 (Ace Attorney 6 - Spirit of Justice) was published, written by programmer Hirata Momoko. She was introduced by Eshiro in the previous post as the only woman in the programming team and in this post, she also reveals she's actually the youngest staff member. She explains about "scripts", tools that decides what appears when and how on the Nintendo 3DS screen. Everything from the characters and text to backgrounds and music is governed by a script and they have been a big part of the Gyakuten Saiban series since the first game.

I worked on script creation, maintenance on the tool that creates scripts, support on the performance of the game screens outside the actual game, on all kinds of things!!
To tell you the truth, I am the youngest around here!!

For this special occassion, I'll spread my freshness around and talk with raised excitement, okay?!!!!!!!!!!!!!!! Anyway! I will tell you about scripts today!! A script? What's that? Is it yummy? Some of you might be thinking now, but...I have a sudden question for you all now!! In Gyakuten Saiban, we have the scenario, which is accompanied by a lot of other stuff, like the characters and backgrounds, the UI*, the sounds. Do you know how we show all of those things on the screen together with the scenario and move all of that around?

* UI: User interface. Things like the text windows where the dialogue of the characters are written, the button that says "Present", all the things that make the game easier to play.

In the screen below we have our familiar defense attorney Naruhodo (Phoenix Wright)!! People who have played the game are probably familiar with this image!? 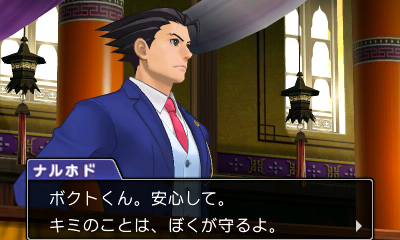 On the game screen you see the characters, background, the UI, all of that in one screen, but they are actually all seperate data files!! And how do we manage to get all of that seperate data together? It is the task of a script to put all of that together!! How does a script put things together, you might think, but the scenario the writers have prepared serves as a base to decide:
All of those things are written in a script. It's like a magic tome, with which you can freely control everything the designers and sound engineers slaved over!!

A script is always based on the scenario, so whenever the scenario changes, we also need to apply changes to the scripts The scenario writers really tried to come up with the best scenario they could, so there was a  lot of trial and error and the scenario was changed a lot of times... And every time we had to change the scripts and test play it again and again... Eh? Change it again? How many times has it been?  When will you stop changing the scenario?!!!!!!!!!!!!!! ...is what I thought countless of times. Changing things so the scenario also changes depending on what you present, or whenever a script was almost finished, they'd want to add more sections where you choose an answer... 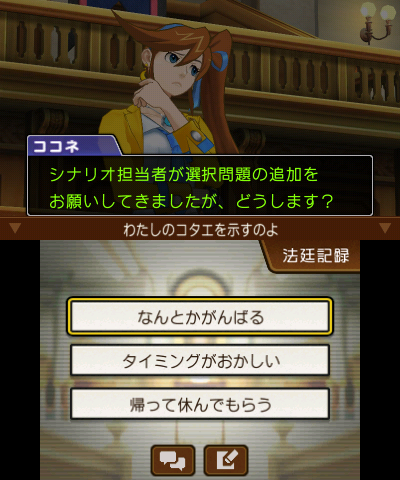 Kokone (Athena Cykes): The scenario writer wants to add a question where you need to select the answer. What shall I do?
And I might have also joked a bit about all of this, but all of the hard work really paid off, and you can really see it's a really fun game where we poured our all into!!!! By using just that little extra effort, we make those comical and deep scenarios and over-the-top and gorgeous presentation you'll only find in Gyakuten Saiban 6!!!!!!!!! It's become a Gyakuten Saiban that won't lose the games that came before it, so please have a lot of fun with it!!!!!!!!!!