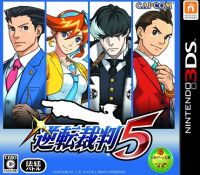 Summary: The music of Gyakuten Saiban 5 (Ace Attorney 5 - Dual Destinies) was featured in 2014's Okinawa Game Tact Special Gala Concert. Iwadare Noriyuki, who composed the music for the game, also composed the Gyakuten Saiban 5 Court Suite, an orchestral piece of music that combined several tracks used during the court sections of the game. The tracks used are:
As an extra special treat, scenario writer Yamazaki Takeshi wrote lyrics for the suite, which a chorus sang on the melody of the final part, Tsuikyū ~ Oitsumemakure. While Takumi Shū is a bit of an amateur musician and has written lyrics for music used in the games in the past, this is the first time Yamazaki did something of the sort. In an interview with the Cosmosky Orchestra website, Iwadare reveals that Yamazaki used his day off to write the lyrics for him. A romanized and translated version of the lyrics follow after the break.

Note: The original article uses "PHENIX", but it is more than likely this is a typo, so it's "PHOENIX" below.