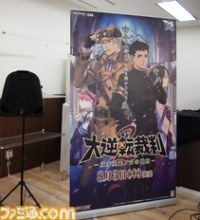 Summary: A special Premium Demo Event was held on June 3, 2017 for the upcoming game Dai Gyakuten 2 - Naruhodō Ryūnosuke no Kakugo- (The Great Ace Attorney 2: Resolve). The event was held at Capcom's Tokyo branch office. The dozens of participants had been selected through the official community website Gyakuten Tsūshin. People were able to pla Episode 2 of the game for an hour in total, which was followed by a short talk show headed by producer Eshiro and director/scenario writer Takumi. The two answer to questions regarding the state of the develoment, the characters and even a hypothetical sequel to the game. This is a translation of the talkshow segment of the report. 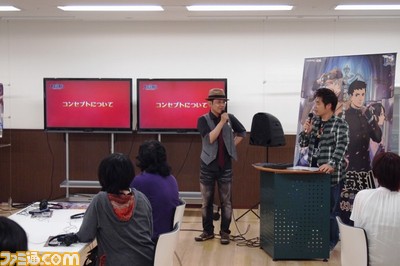 Eshiro: Let’s have Takumi here first explain the concept of this game.

Takumi: As it says on this poster, I’m working very hard at making sure “All The Mysteries Are Solved” (laugh). Is it okay if I mention it here? The development on the game is basically done, so that’s why I was able to make it here today.

Eshiro: Moving on to the characters. We have a web demo online now, with a new character called Naruhodō Ryūtarō… Some say Ryūtarō resembles a certain character, but I’ll keep on calling him Ryūtarō… Besides the characters from the previous game like Holmes, Iris and Van Zieks, we also have interesting new characters appear.

Takumi: It’s weird calling them “interesting” myself (laugh). But I do have fun with them even when I’m test-playing the game and there are many characters we haven’t revealed yet, so I think you can look forward to them. 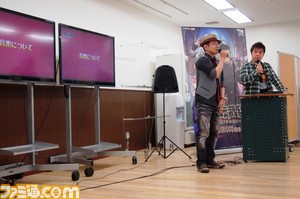 Eshiro: We went to the Orchestra Concert a while back. Did anyone here go there? (Many hands are raised) Ooh, wow! Thank you very much! You wouldn’t believe what sound composer Kitagawa and Takumi kept talking about at the concert…

Takumi: It wasn’t that bad (laugh)

Eshiro: Really? (laugh) What did you focus on for the music of this game?

Takumi: The same we did for the characters: I had Kitagawa compose the music to be “unforgettabl after hearing it only once”.

Eshiro: By the way, the mini soundtrack included in the double pack Dai Gyakuten Saiban 1 & 2 -Naruhodō Ryūnosuke no Bōken to Kakugo- (The Great Ace Attorney 2: Resolve) contains tracks from both games, so please keep an ear out for the music. 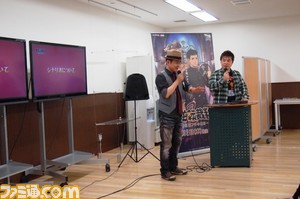 Eshiro: I think you have a lot you want to tell about the scenario, but be careful you give away much (laugh).

Takumi: Well, I’ve been working on this in the hopes everyone will have fun playing this. It’s a bit weird saying this before the game’s even out yet, but it’s all in this game.

Eshiro: You stuffed everything you have in this game, right?

Eshiro: Anything you worked extra hard on in regards to the scenario for this game?

Takumi: Hmm. I basically always have the same stance on this: putting everything I have at the moment in the game. But I kept on stuffing more and more in this game, until stuff started sticking out, so in the end I had to work hard in keeping it all inside (laugh).

And then the questions corner. Mr. Eshiro and Mr. Takumi answered to both questions from the audience as well as to questions which had been prepared in advance. 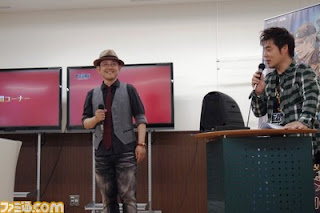 Question: I was surprised that that happened to that character in the demo. Was this already planned since the first game?

Takumi: The game’s not out yet. Is it okay to tell them?

Eshiro: Depends on what you want to say (laugh). The victim of the demo… That’s too dangerous (laugh). Please look forward to the full game…

Takumi: I do want to talk about this! I at least do! (laugh)

Question: What was difficult about developing the game?

Takumi: Well, I also created the Gyakuten Saiban (Ace Attorney) series, so that made me extra eager to do my best on this new series. I worked hard on the scenario, but as I mentioned just now, I kept on stuffing more and more in the game, and as I spent more and more time with the characters, I myself also learned all kinds of new things about them.

Question: I really like the Natsume Sōseki that appears in the game. I think it was the first time a real person appeared in the Gyakuten series. Could you tell us about the reason or concept behind his character?

Eshiro: (laugh) So he is faithful to the real thing.

Takumi: Sōseki was of course really studying in England at the time, and he’s often used in mystery fiction because of that. So I decided to do that too. Nineteenth century England = Sōseki. I read up on the documents from that period when I created him. And there’s a bit of imagination too (laugh).

Question: When the first was released, Van Zieks’ line “Please forgive me” became a bit popular on the internet. Are there phrases like that that became popular among the members of the developer team?

Eshiro: Ah, yes. You never know what may become popular when you’re working it. Did you really write the line thinking it was funny and that’d get popular?

Takumi: Well, of course I wrote it because I thought it was funny (laugh) But I couldn’t have dreamt it’d become popular.

Eshiro: I think few of us expect people to enjoy a certain line so much.

Question: I like Holmes and when I tried the game out just now, I thought that he moved around even more intense, with more variety compared to the first game. Do you come up with the movements of Holmes?

Takumi: Well, we have actors come to us, and I tell them to do whatever they want. I have them do some patterns, and near the end, when they start to repeat their movements, I select the best movements. That’s how we made the first game. For the second game, I had once again actors come and told them to just move around. I’d give some concrete directions and update the data we had until we got what we wanted.

Question: I feel like the concept of this game is: “All The Mysteries Will Be Solved”. Does that mean that all the foreshadowing of the first game will be cleared up in this game?

Eshiro: All the mysteries will be solved. Like it says here, all will be explained.

Takumi: (silently) As long as I haven’t overlooked anything… 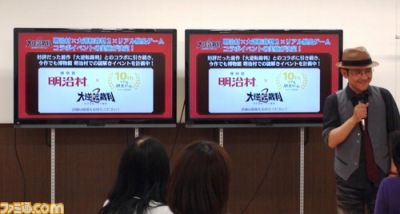 To the question: “Will a Dai Gyakuten Saiban 3 or 4 come?”, Mr. Eshiro answered “If 2’s popularity explodes… then I think we may expect Takumi to work on them.” Other interesting questions were raised at the event. A janken tournament was held where special merchandise were given away as presents, and a nice atmosphere prevailed throughout the event. Let’s look forward to the release of this game which will put an end to all the mysteries.