Summary: On June 4, 2017, series producer Eshiro and series director Takumi held a "Special Court Seminar" on Gyakuten Saiban (Ace Attorney) the Akihabara, Tokyo location of the Human Academy The two discussed how the game series was first created and the core concepts behind it. The two also discuss how the spin-off series Dai Gyakuten Saiban (The Great Ace Attorney: Adventures) was conceived. This is a translation of part one of Inside's two-part report on the Special Court Seminar. A translation of the second part, which delves into the topic of Dai Gyakuten Saiban 2 - Naruhodō Ryūnosuke no Kakugo (The Great Ace Attorney: Resolve) and localization of the series is available here.

On July 4, Mr. Eshiro and Mr. Takumi from Capcom held the Special Court Seminar, a lecture on the Gyakuten Saiban (Ace Attorney) series, at the Akihabara, Tokyo location of the Human Academy. These two men work as the producer and director of Dai Gyakuten Saiban 2 - Naruhodō Ryūnosuke no Kakugo (The Great Ace Attorney: Resolve). Our report on this rare lecture, which also involved some behind-the-scene tales about the game, will be split in two parts.


There Was Also The Idea Of Making A Detective The Protagonist? How Gyakuten Saiban Was Born

The lecture started with the introduction of the duo. Mr. Eshiro was the one who broke the ice. The first title he got to work on after joining Capcom was the arcade game Street Fighter II. He told how back then he was still young and rash, and that he wanted to make the character he himself worked on ever so slightly stronger than the other characters, so he secretly made the hitboxes of the Somersault Kick larger, but it was found out, and Nishitani Akira (the current CEO of ARIKA) got very angry at him. He then became a programmer on Vampire (Darkstalkers) and then he changed positions, and worked on planning with Onimusha. He worked as the director of Onimusha 2. And with the release of the Nintendo DS release of Gyakuten Saiban 2 (Ace Attorney 2 - Justice For All), he became the producer of the Gyakuten Saiban series.

Mr. Takumi on the other hand first got to work on Gakkō no Kowai Uwasa Hanako-san ga Kita!! (“Scary Rumors At School - Hanako-san Is Here!!”) at Capcom. And then he became the main planner for Dino Crisis (even though he himself says he knew nothing of dinosaurs) and was made the director of the second game. Takumi also looked back at the time when Mikami Shinji told him he’d “give Takumi half a year so he could make whatever game he wanted” and even though he used more than half a year, the game that was created turned out to be Gyakuten Saiban.

Mr. Takumi had always loved mystery fiction, and he had gone to Capcom in the hopes of making a mystery game. But back in the 2000s, when the project of Gyakuten Saiban was planned, the most common style of adventure games where those you’d just read the lines and proceed in the story. You’d sometimes have to choose the correct answer among several options, but there were few games where the player could really feel they had deduced something and solved the mystery themselves, Mr. Takumi said.

That is why he thought about a game concept where the player themselves could feel how it was to make inferences themselves: a mystery game based on a merit system, where the player needed to think for themselves. That became the now well-known mechanic of pointing out the contradictions in the witness’ testimonies. For example, if the testimony of a witness is divided in five blocks, and you’d need to choose the correct the correct piece of evidence out of five, and at the right spot, that’d mean the player would need to choose the correct answer out of twenty-five possible options. So this mechanic allowed players to directly input their own inferences.

As for the setting, Mr. Takumi says that at first he had thought about having a detective go against the criminal, but there were already plenty of adventure games featuring detectives as the protagonist, so he was afraid his game would get lost among all those other games. So he then asked himself if there wasn’t a different job that’d be somewhat similar. And that is how he arrived at the theme of a defense attorney and the court.

He put it all together into the concept of “a mystery game where a defense attorney exposes the contradictions of witnesses in the courtroom” and presented his plans, but the reactions to it were less than favorable, and many were of the opinion it sounded too complex and hard to understand. It was then decided to make the characters designs more cartoon-esque, and this is how those unique characters that are instantly recognizable by both face and name were born.

Because the underlying game concept was that it wasn’t about “Who the culprit was” but “How to corner the culprit”, they could get away with a compact cast of characters. To give the players as much possible chances to experience the excitement of pointing contradictions out, they also went with the short story collection form, which would allow them to use many courtroom scenes. This is how the Gyakuten Saiban that everybody knows was born. Mr. Takumi stressed that “There is a reason for every single element of the game, from the concept to the story structure to the characters.” 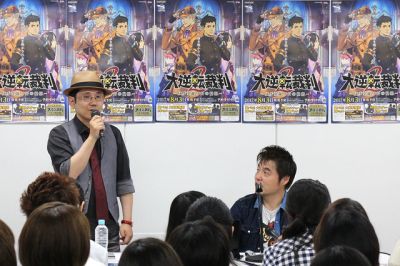 1. Make great changes to the story, world .
2. Make a story about civil trials, not criminal trials.

But if he’d go with civil trials, he’d been having stories about guilty or not guilty verdicts anymore, but about settlement money and things like that, and he asked himself the question whether he really wanted to write about that. So as a result, he had to go with the choice of changing the story and world for his new game.

Mr. Takumi had first come in contact with the world of mystery fiction through the Sherlock Holmes series and afterwards he also learned to appreciate the works of Dickson Carr and others. He remembered he still had “one bullet” left in the form of classic mystery fiction set in the 19th century, and that is how Dai Gyakuten Saiban was born.

As mentioned earlier, Gyakuten Saiban was originally conceived as a detective game. The idea of having the player correct the faulty deductions of the detective was born back then, and Mr. Takumi incorporated it in Dai Gyakuten Saiban as a proper game mechanic. Looking back now, Mr. Takumi said that “Holmes has perhaps always been a part of the Gyakuten Saiban series.”

Observing the surroundings well and changing a faulty deduction in a brilliant one…. The one weak point to this story flow is that “there needs to be a faulty deduction first”, and this repeating pattern can be considered as a demerit. That makes it all the more important to make sure the players won’t get bored with it and continue to enjoy it. This all formed the foundation, and with a juror trial system added to invoke the feeling of the trials of the British Empire back then, Dai Gyakuten Saiban was born.

There was the idea at first to have the jurors as nondescript minor characters with no personalities of their own, but as Mr. Takumi worked on it, they all got more unique. As a result of this, chocolates were sent to Capcom addressed to Juror No. 3 for Valentine’s Day.

Here ends the first half of the report on the seminar. The second part is scheduled to be published on June 16, featuring some behind-the-scene tales on Dai Gyakuten Saiban 2 and localization circumstances. Please read that article too.

This seminar was held in the Akihabara school, and also on July 11 in the Ōsaka school. It has also been decided that extra lectures will be held starting July in Sapporo, Sendai, Nagoya, Hiroshima, Fukuoka and Naha. While there is still time until those lectures, it might be wise to sign up for the lectures as soon as possible if you’re interested, as the Akihabara and Ōsaka lectures were very well received.