Celebrating The Release of Gyakuten Saiban 6! Behind-The-Scenes Tales Of The Sound Production Revealed (2016)

Summary: In this interview posted on July 12, 2016 on CAP'STONE, Gyakuten Saiban 6 (Ace Attorney 6 - Spirit of Justice)'s sound director Horiyama talks about all things related to the sound design of the game. From how the sound effects are created, to the tracks he thinks are the most interesting, almost everything included in his job as the sound director is mentioned. Special attention goes to differentiating the original Japanese setting with the new setting of the Kingdom of Kurain in terms of sound.

Tantan: Could you please tell us what makes this game so great? 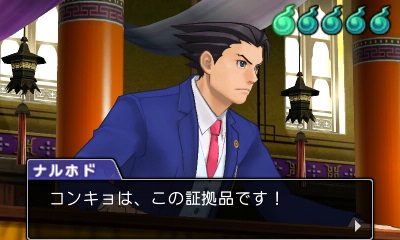 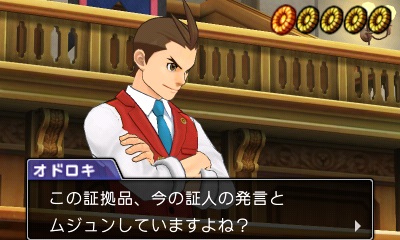 Horiyama: We also have familiar faces for the old fans of Gyakuten Saiban pop up, like Ayasato Mayoi (Maya Fey), but the new characters, like the new prosecutor Nayuta (Nahyuta) or Reifa (Rayfa), one of the heroines of this game, are all fascinating too. 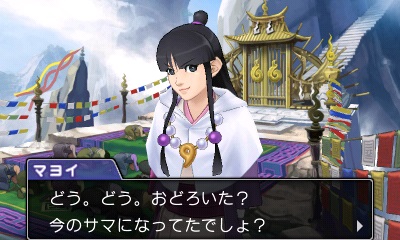 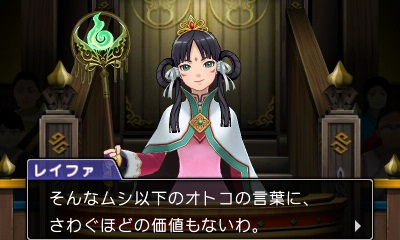 Horiyama:  There’s a new deduction mechanic in the trials called Spirit Channeling Visions (Divination Séance). You might find it a bit strange in the beginning, but as you progress in the game, it’ll get intricately connected to the plot, and I think people will really enjoy that exciting feeling when they finally solve the puzzle after thinking hard about the problem. 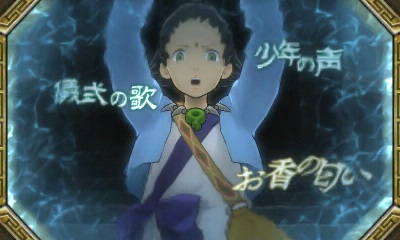 Horiyama: The story, and that includes the downloadable content, is filled with one turnabout after another that make the tale a thrilling one, so I think the players will have lots of fun with the game. I am sure the volume of the game will satisfy them. 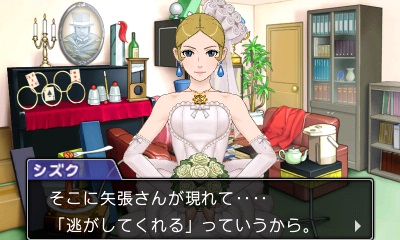 Tantan: Could you now tell us about what the sound staff did for this game and about the other staff members? 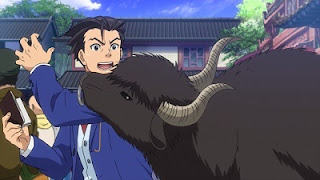 Tantan: Could you explain the interesting points about the sound direction and the mechanics behind it?

Horiyama: Like I mentioned right now, this game features two settings: Japan and the Kingdom of Kurain. The music and sound effects used in the setting of Japan builds on the familiar atmosphere and feeling of previous games, but the music in the Kingdom of Kurain are all new, with an ethnic feeling to them. We created completely new sound effects for use in the Kingdom of Kurain, for example for when a testimony or cross-examination starts, or that sound when you win a Not Guilty verdict. We have different music for both Japan and Kurain, like the music in the courtroom lobby, when the trial starts, at the detention center, the investigation themes, etcetera. 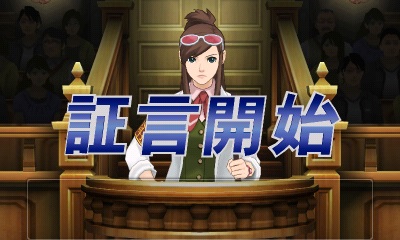 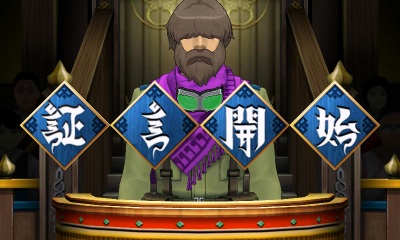 Horiyama: As for mechanics, there’s a witness in the first episode who testifies in the form of a “song”, and we had the appearance of his lines in his testimony (lyrics) on the screen match with the timing of the melody of the music. It was something the planning staff wanted, so Mr. Onodera and I worked on that, and it took some trial and error before we got it. We have a development blog scheduled for the official Gyakuten Saiban 6 site that goes into details, so please read it (* Scheduled for publication on July 11 2016). 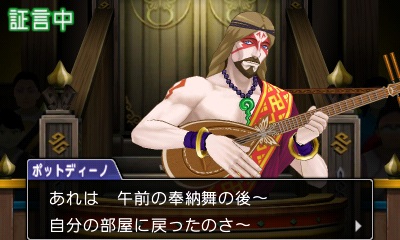 Horiyama: Like with Gyakuten Saiban 5, we also made sure the game sounds good both from the 3DS speakers and when using headphones. If you plug a headphone in the 3DS, it will automatically adjust the sound quality for optimal listening.

Tantan: Could you tells us what we should pay attention to while listening to the sound effects?

Horiyama: I already touched upon it briefly right now, but I’d say it’s the sound effects for use in the courtroom of the Kingdom of Kurain. We have sound effects there that sound different from those we know from the courtrooms in Japan, like for when a testimony or cross-examination starts, or for the new mechanics Spirit Channeling Visions. We also made a new version of the gavel, a sound effect so iconic to the Gyakuten Saiban series, for use in the Kingdom of Kurain. We recorded this at Foley Stage, the great sound stage Capcom has. The sound of a hammer hitting a wooden desk is the basis of that sound effect. I think it has a different feel than the gavel in the Japanese court, as it’s lower and deeper. 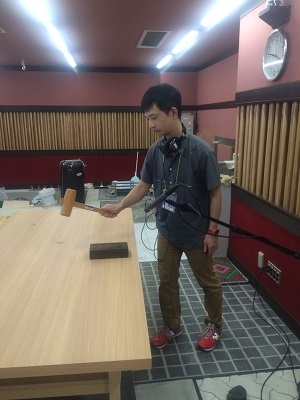 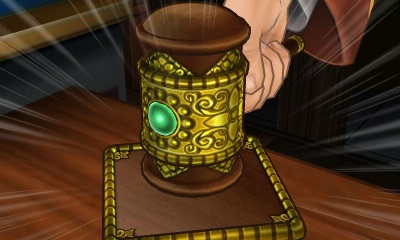 Horiyama: So we recorded the sound effects at Foley Stage, but Mr. Wada really went all-out on it, giving the sound effects a real handcrafted feel to them. They really sound unique. For the  sound of Nayuta’s rosary for example, Mr. Wada went and bought a large rosary at an Buddhist altar shop, and did the action himself. 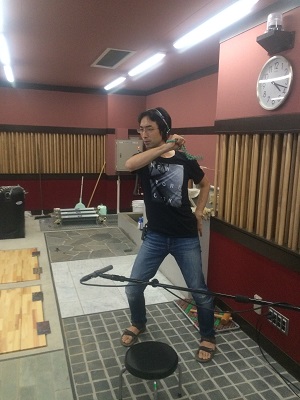 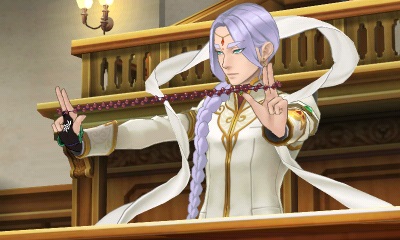 Horiyama: Mr. Wada created many humorous sound effects. In the second half of the story, there’s a scene where a character is cornered and gives up, but there’s a really funny sound effect there. I’d love to tell you more about it, but you’ll have to play the game and listen to it yourself.

Tantan: Please tell us about the music of this game.

Horiyama: Mr. Iwadare mostly wrote the music for the trial parts and the character themes for the Kingdom of Kurain. If I have to mention one song, it’s Hōnōmai ("Song of Devotion"). It’s very unique, but still easy to listen to. It’s a fantastic song. It gives the courtroom in the Kingdom of Kurain elegance. 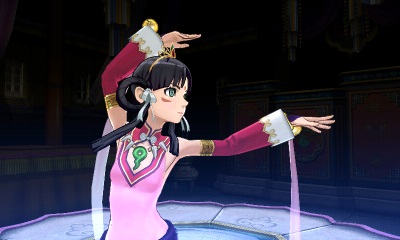 Horiyama: I had Mr. Onodera mostly work on the themes of the characters in Japan and the investigation themes. If I had to mention on song in particular, it’s the track Okashina Hitobito (“Strange People”), which is used when somewhat suspicious people appear. I really love this song. The cord progression at the end of the track offer an odd sense of relief. 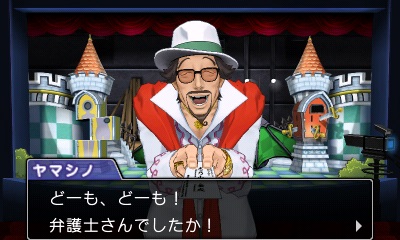 Horiyama: And I mostly worked on themes of characters in Japan, and if you allow me to mention one of my own songs, it’s Ryūchijo ~ Tsumetai Kabe no Elegy (“Detention Center ~ Elegy Of the Cold Walls”). I think it’s an emotional song that pretends to be inorganic. It isn’t flashy, but I really like it. 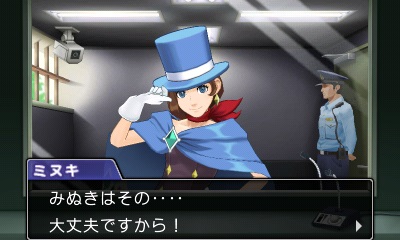 Tantan: Finally, do you have something to say to the users who are playing this game?