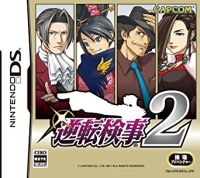 Summary: In this blog post published on 17 November 2010 on the Gyakuten Kenji 2 ("Turnabout Prosecutor 2") blog, producer Eshiro writes a piece about how he and director Yamazaki often have "fights" about what they want in the game. Their "rivalry" is often joked about in interviews and columns, as while both naturally want to make the best game possible, they both have their own opinions about what is best for the game. In this blog post, Eshiro explains how their differing views on the character of Mikagami eventually merged into the final character design.

Producer Eshiro here. The days and nights since I've announced the release date of Gyakuten Kenji 2 ("Turnabout Prosecutor 2") have been busy with promotion work, so with the previous post, I'm writing this inside the Shinkansen train.
But!! Lately, my memory has been failing on me hard.

I keep forgetting the names of people and titles of movies

This is bad, I thought. So I have now started with memory training, like recalling in order what I had for dinner this week,  but with the plotting, I mean, support of AP (assistant producer) Shiozawa, I hope even more people will be able to learn about what makes Gyakuten Kenji 2 so fun. I hope you'll keep supporting us!

Anyway, as for today's topic.

The second report on Gyakuten Kenji 2 was published in the Weekly Famitsu which went on sale yesterday, and in it you'll find the latest information on the judge Mikagami. As we worked on her design to make her the most powerful rival in the Gyakuten series, it speaks for itself that as per Gyakuten Kenji development team tradition,  director Yamazaki and I exchanged quite a few

At the very start, director Yamazaki had imagined Mikagami like a saint, so he wanted a design that emphasized her gentleness throughout. I on the other hand, wanted a more awe-inspiring design, something imposing that would make her a true rival to Mitsurugi (Miles Edgeworth).

Yamazaki D wanted a saint.
I wanted someone impressive enough to be a rival.

In his profile picture Yamazaki D is drawn all cute like a little critter, but actually he's a pretty stubborn..., I mean strong-willed man. He dares come straight at me, the Final Boss, sometimes answering my assaults with a flurry of punches or countering with locking techniques, as if he has mastered Mixed Martial Arts (just to be clear: we're talking about meetings here).
Through the confrontation of our opinions, we arrived at a design that not only has a saintly air to it, but also an awe-inspiring element that is fit for the greatest rival.

Polished by all these small clashes between our emotions, Gyakuten Kenji 2 has become a work of even great quality.  At the moment we are in the final phase of bug checking and minor adjustments. It will take just a bit longer before you will be able to take the game up in your hands, but please look forward to it.

We will continue to reveal new information as we approach the release date, so look forward to that too!

P.S.
The illustration below has some rough sketches with the very earliest designs of the judge Mikagami. She feels quite different here from the final design, but Mr. Iwamoto actually drew even more designs for us, about ten, and it was through my battles with Yamazaki D that we eventually arrived at an even better design for Mikagami. 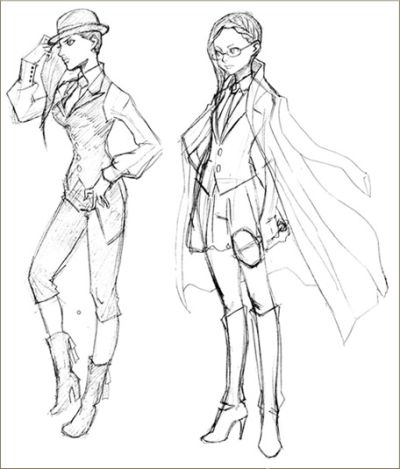