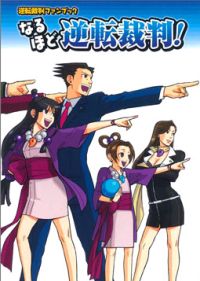 Summary: The column "Naruhodo Gyakuten Saiban!" ("I See! Ace Attorney!") in the monthly game magazine DreaMaga (an abbreviation derived from its old format titled DreamCast Magazine) ran for 19 months starting in the September 2004 issue and was written by Gyakuten Saiban (Ace Attorney) creator Takumi Shuu, as build-up to the release of the DS port of the first game. These columns usually consisted of a short essay by Takumi, some dialogues that had been cut out of the games, and a one-page dialogue-based short story starring the characters from Gyakuten Saiban, accompanied by an original illustration by Suekane Kumiko, the original main character designer of the games.. The theme for the sixth column is Gyakuten Saiban 3 (Ace Attorney 3 - Trials & Tribulations), with as highlight the original idea he had for the final episode of this game. Note that this translation only includes the column itself, and none of the other parts (short story/cut dialogues).

Hello!
In the previous column and the one before, I looked back at the trilogy, so this column will be the final one in this series.

To let you in on a secret, when we finished the scond game, I already had an image in my mind of how I wanted the final episode of the third game to be. The final product turned out to be something completely different, so this time I'll start by telling you what I first had in mind.

An assassination committed by a professional assassin occurs in front of a fancy hotel. The name of the assassin is Koroshiya Sazaemon (Shelly de Killer), But then it is discovered that he died 17 years ago! In the end, it is revealed that Sazaemon is in fact... Ayasato Maiko (Misty Fey) who had been channeling him for those 17 years!

Hmm. Sure is shocking. And it's all true. Was I right in not going with this idea?

I worked three years on the Gyakuten Saiban series. It was certainly a tough period, but I never felt sick of it. Probably because I remembered how happy I was when we finished the first game.
"You can only finish something by working on it bit by bit".
That's a lesson I learned throughout these three years.

I also want to express some words of gratitude to Suekane, who draws the illustrations for this column. It was she who three years ago, taught me how to create characters. If it weren't for her, the world of Gyakuten Saiban wouldn't be here now. Thanks!

And to all those people who have played this game series. Gyakuten Saiban has only come this far because of all your support. I want to make use of this occassion to say thank you to all of you who know Gyakuten Saiban. Thank you so much!