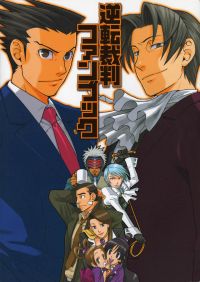 Summary: Gyakuten Saiban Fanbook was originally released in 2005 just before the Japanese release of Gyakuten Saiban Yomigaeru Gyakuten (Ace Attorney DS), and i  featured a couple of character profiles for Naruhodō (Phoenix Wright) and Mitsurugi (Miles Edgeworth), with information that was imagined by the fans themselves! From birthdays, place they live and bloodtype, to hobbies, their favorite foods and what they did on their days off, the fans had thought off all kinds things for the main characters of the Gyakuten Saiban (Ae Attorney) series. In return, director Takumi, producer Inaba and character designers Suekane and Iwamoto also responded to those 'fan-theories/head-canon' and also talked about their own 'head-canons'. In his reaction to Naruhodō's profile, Takumi added a couple of (unofficial) background ideas to the character, including his background as a Thespian. This translation only includes Takumi's comments, not the profile itself.

Interviewer: The fans came up with the character profile for Naruhodō printed on page 46. What are your thoughts about that?

Takumi: They really came up with lots of stuff. Personally, I think the more you learn about him, the harder he becomes to understand. Mitsurugi (Miles Edgeworth) you see, is someone who’s a bit different from normal people, so it’s easy to come up with funny or interesting answers for him. But Naruhodō, he’s just a super-ordinary person (laugh). One of the masses. So it’s hard to imagine how his life is.

Interviewer: Mr. Inaba and Mr. Iwamoto also said they saw him as one of the common people (see page 48).

Takumi: Exactly. He feels like he was raised in an ordinary family. I imagine he lived with his family in prefectural housing, like a public housing apartment. He’s probably renting a normal apartment now and uses public bathhouses.

Interview: As for how he’d go to the office or the public bathhouse from his home, if you look at the comments in the questionnaire, it appears most people think he uses the bicycle….

Takumi: He probably uses a city bicycle. He doesn’t look like he’d ride a mountain bike (laugh). By the way, I don’t use a city bicycle myself (laugh).

Interviewer: And how about other means of transportation, like the train or car?

Takumi: He doesn’t own a car. A car wouldn’t even really suit him (laugh).

Interviewer: Does he has a license?

Interviewer: By the way, do you have a driver’s license?

Takumi: I don’t have mine (laugh). That might a part of me that’s reflected on Naruhodō.

Interviewer: But you drink a lot, so you shouldn’t drive anyway. It’s dangerous.

Takumi: No, but I can concentrate better when I’m drunk. I’d be better at driving with a few drinks!!

Interviewer: Err… don’t drink and drive. Let’s see what the people said about Naruhodō’s part-time job during his college years. Him being one of the common people, one can easily imagine him in the service industry as it’s close to his own world, but as he was in the arts faculty, it would’ve been interesting if he had modeled for a painting or something.

Takumi: I could imagine him as an assistant to a mangaka.

Interviewer: What did Naruhodō study at the art faculty, actually?

Takumi: I had already decided on that in my mind, you know. He was aspiring to become a Shakespearean actor. That’s why he was studying the arts. This is why he always moves in such an exaggerated manner.

Interviewer: So he would eventually go to England to study theater there?

Takumi: I think so. But he came across a newspaper article about Mitsurugi while in college. So that’s when he changed plans, and started to study to become an attorney so he could meet Mitsurugi.

Interviewer: It’s surprising to learn he wanted to become an actor. Perhaps he’s actually really susceptible to fads and things like that?

Takumi: I think he’s just the type who’ll go straight for something and stick to it once he’s convinced of something. Like the type of person he falls for (laugh).

Interviewer: I see (laugh). Let me ask you about his cell phone. What are your thoughts about his phone? Is he clinging on an outdated model because he’s bad with technology and gadgets?

Takumi: He uses an old cell phone, one of those brick types. But he probably isn’t really good at using that one either. He probably doesn’t change models until his old one’s broken. Actually, he likely doesn’t even have the money to change models (laugh).

Interviewer: Naruhodō always seems to be working on cases that don’t really bring much money in, so I imagine his finances are not really super.

Takumi: It probably takes a lot of money just to keep the office running. It’s pretty spacious and neat. But I think that Naruhodō fits the poor image best, to contrast with the rich Mitsurugi. How should I put, it gives some flavor to him (laugh).