Summary: In the eighth column for the official Gyakuten Saiban 3 (Ace Attorney 3 - Trials & Tribulations) website for the Game Boy Advance, character designer Iwamoto Tatsurō writes about hiding little jokes and other stuff in the background images for the games. Because the images are first drawn on a higher resolution, and later shrunk down for the Game Boy Advance, a lot of these jokes were hard to see when they were originally released, though more recent HD releases have changed this.


Little Jokes And I

As I hinted last time, I want to talk a bit about little jokes this time.

It is difficult to add little things to the characters that have nothing to do with the main game, so I try to hide these ideas in the backgrounds. When working on backgrounds, Mr. Takumi indicates what things absolutely need to be present as part of the game. 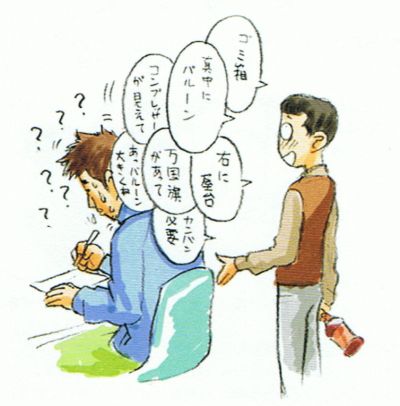 "Waste basket. A balloon in the middle. A compressor you can just see. A stand to the right. Bunting. Oh, the balloon needs to be larger. I also need a sign."

So I add little jokes and pranks, making sure they don’t get in the way of the necessary points of the background. We draw the backgrounds of Gyakuten Saiban at a large size, then make them smaller and turn it in sprite art. Most of the fun can be found here (there’s just little jokes, so they can’t be too visible.) 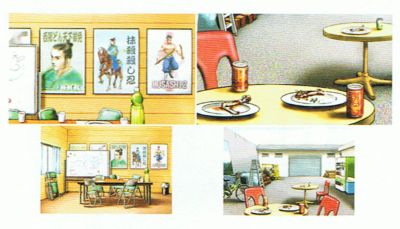 On the right we have the inside of the cottage of Episode 3. Below is how it looks in the game. The contents of the posers are pretty crazy, aren’t they?

The image on the right is also from Episode 3. It’s a bit hard to read, but the empty cans say misoshiru (miso soup) and name. Name is probably nameko soup. It’s been a while since I last saw these illustrations, but man, I used to do lame jokes…..

Most of the jokes I hide in the backgrounds like this, but in some rare cases, a little joke can grow out to a series mainstay.

I myself was surprised I drew this. 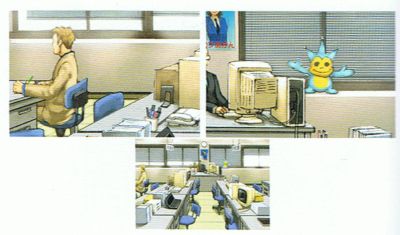 Left is a plain clothes detective. That is actually a self portrait. I was jealous Mr. Takumi had added a “Takumi” and a “Shū” in the game, so I wanted to add myself in secret too. Thanks to Mr. Takumi’s lines, I became a funny character. Right is Taiho-kun (The Blue Badger). If you examine him, you learn he’s the mascot figure of the police, but if you zoom in you see he’s not really cute. He was so not cute, I redid his design a bit when he reappeared in Gyakuten Saiban 2. 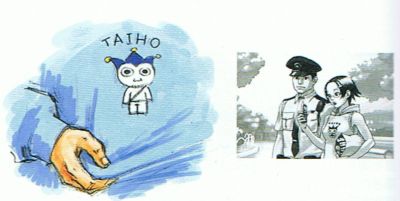 Mr. Takumi told me that he still didn’t look cute, but in a different way. Most of my cute characters aren’t really appreciated. But I like this straight, not overly cute design. I’m the same as him as I write these columns. I hope that one day, there’ll be merchandise of him.

There are still all kinds of things hidden within the game. It’d be a shame if you’d only play the game once! Why not go with a slightly fanatical play style, looking around here and there for some laughs?