Summary: In his third column for the official Gyakuten Saiban 3 (Ace Attorney 3 - Trials & Tribulations) website (of the GBA version), character designer Iwamoto Tatsurō writes about his work for the second game in the series. He had already worked in the first game, but he was made the main character designer for the second entry in the game. Iwamoto confesses he went a bit too far actually, and that it was his fault that Gyakuten Saiban 2 ended up with four of the originally planned five episodes, because his animations and designs were just too big to store on a GBA cartridge.


Gyakuten Saiban 2 And I

This time I want to talk a bit about my most important work, Gyakuten Saiban 2 (Ace Attorney 2 - Justice For All). At the time it was decided there’d be a sequel to Gyakuten Saiban (Ace Attorney GBA), Ms. Suekane, the main character designer of the first game, was very busy as the main designer on a different game. As I had already worked on the series, the arrow was then aimed at me. 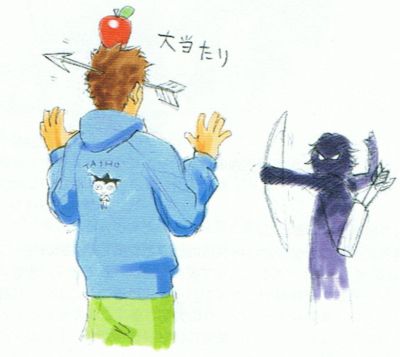 As I already mentioned in the previous column, Gyakuten Saiban is a special game to me. So can you imagine how happy I heard that there’d be a sequel, and that I would be working on it again? But the worries about whether I could really manage the job were even bigger than my joy. Because of that,  it was not rare for me to make mistakes because of all the euphoria and anxiety inside of me mixing.

Let me confess honestly to one incident that happened because of me. Some of you might already be aware of this, but Gyakuten Saiban 2 was originally planned as a five episode game. But one whole episode had to be scrapped because there was an enormous shortage on storage volume. Part of that, no, half of that (more than that?) was my fault.

“Ah! I have it! It’d be great if this character would do this!”

…Fool. The thought of storage volume had flown of somewhere far away. The producer, the director, the programmers…. Everyone got mad at me. Everyone who played Gyakuten Saiban 2: I’ll apologize to you before you can get angry at me.

“I am sorry. I really meant no harm.”

Speaking about stupid actions, I did another foolish thing, because of how happy I was we had finished the game. I wanted the game to sell well, so what could I do? 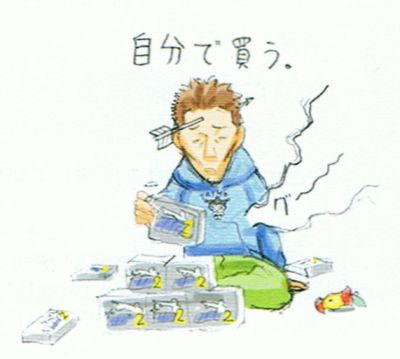 I bought it myself.

For a period, I was forced to live as shabby as Detective Itonoko (Dick Gumshoe). And this might sound stupid, but I might do the same when Gyakuten Saiban 3 (Ace Attorney 3 - Trials & Tribulations) is released.

By the way, one time, when I was about to buy a copy of the game at a game shop, I saw something that made me really happy. 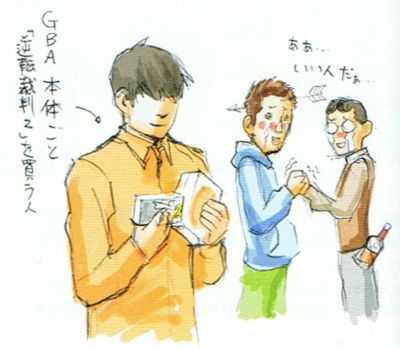 Someone buying Gyakuten Saiban 2 together with a GBA.
“Ah… What a wonderful person…”

I had never seen someone buy a game I had worked on before. I wanted to burn the scene right into my eyes, but my tears prevented me from seeing it clearly. Developing a game is of course not only fun. It happens often you don’t want to take a step back for someone else, and that leads to fights. But if the result is that you can be witness to such a scene… Seeing someone buy our game became a great motivation for me to work on Gyakuten Saiban 3.